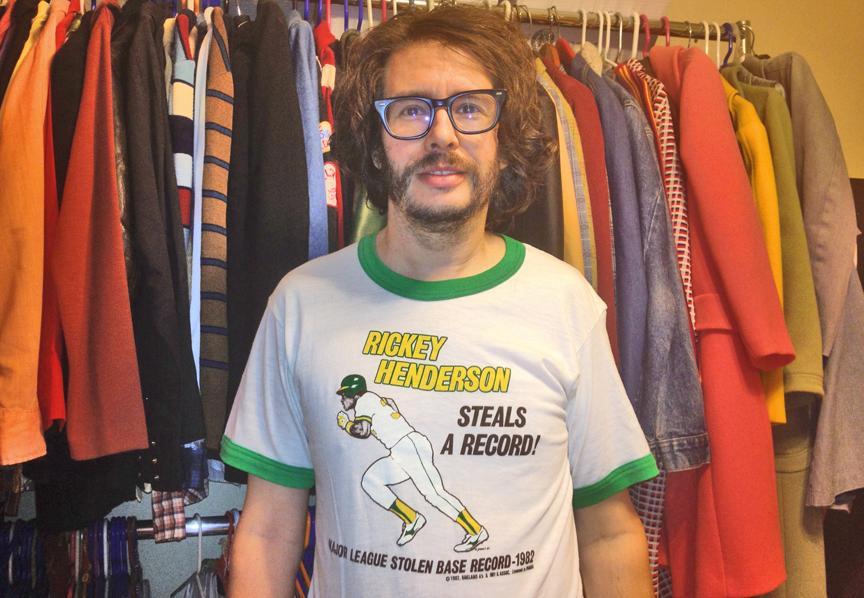 The Most Expensive T-shirt I Ever Bought
By Jeffrey Howard

This is the story about the most expensive vintage shirt I have ever purchased.

It’s opening day for baseball season for the Oakland A’s today as I write this. This year is a little more special as the Oakland A’s are renaming their baseball field in honor of Hall of Famer Rickey Henderson, my favorite baseball player.

Rickey Henderson was a professional baseball player from 1982 through 2003 and is considered the greatest baserunner and leadoff hitter. He owns several all-time MLB records including most career stolen bases, most runs and most leadoff home runs among others. His first record, set in 1982, was for stealing 130 bases, the most in a single season.

The reason he is even my favorite baseball player has nothing to do with any of his accomplishments. It has to do with I thought he had a really cool picture on a baseball card. In the third grade my teacher would get magazines like Dynamite and Bananas. I loved reading them. In one issue there was an uncut sheet of 1982 Topps that kids were supposed to cut out and collect. I had no interest in baseball but sure did cutting and collecting. I cut out the cards with third grade shake hands. There were probably nine cards in total I took home. I had no idea who any of these players were but this Rickey Henderson person just looked plain cool. Because of that he was then my favorite player.

It wasn’t until 7th grade until I actually had an interest in following baseball. It was easy to get into since I had a favorite player. By then Rickey was playing for the Yankees. I got to see him play in person during spring training against the Minnesota Twins when they trained in Orlando, Florida. I even saw him steal a base in person. It was the coolest!

In the 1990s I did own a Rickey Henderson t-shirt I bought at the mall. It was a neat but maybe a little terrible 90’s design. It went missing. I would check Ebay from time to time and it would never show up because I wanted to get one again, if possible. I did see it once as a tank top but passed. 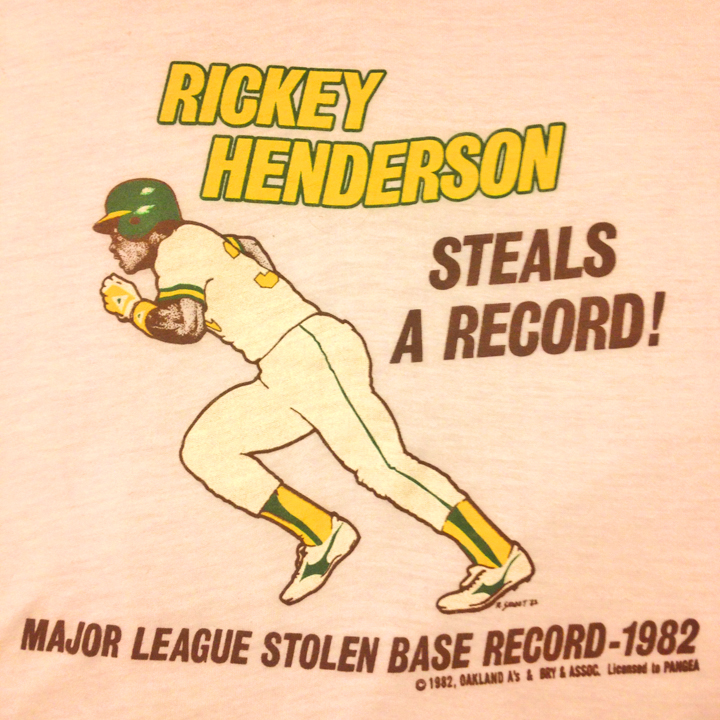 About four years ago I came across a listing on Ebay of a Rickey Henderson shirt I had never seen before. It was a white and green ringer that had Rickey in a running position and it said “Rickey Henderson Steals A Record” dated 1982. How awesome was it to find such a shirt just about his first stolen base record? Was this something that actually existed? In all my years of collecting of Rickey items I never came across even a picture of this. Pretty unbelievable. Side fact: the same season he also set the all-time record for times being caught stealing.

I was watching some YouTube footage of Rickey, most likely filmed in the 1983 baseball season, and saw someone wearing this exact shirt. I could not believe it! If you watch the below video you can see a fan in the stands around the 0:50 mark.

The seller said it had never been worn or anything. When I received it I just could not believe how pristine the shirt was. It was even a perfect fit! It would now be my favorite forever shirt. I can say that about much of my clothes but really – this was the best one.

I am a little afraid to wear it often but I shouldn’t be. But it’s a special day for Rickey so I will wear it. I also have to mark my calendar for July 15th, it will be the first official Rickey Henderson Day. Neat.

Oh, I paid $50 plus shipping making it the most expensive shirt I paid for. Worth it!

This is a special series written for Kick Bright Shop featuring people talking about a favorite piece of vintage clothing item from their life. If you would like to be interviewed for this series contact kickbright@hotmail.com.

Orlando,FL View all posts by jkickbright

1 thought on “The Most Expensive T-shirt Jeffrey Ever Bought.”

It’s Saturday and we are back in action! Open noon until 6pm. Come and visit! Vintage, collectibles, buttons, magnets and other cool stuff are all right here!
Open til 6pm Thursday.
Look!!!! We have new friends!!!! Our garden is growing. Bring something by!
#FindKickBrightHERE
#kickbrightbulkorders @spektrum_health_bhe
Working on #kickbrightbulkorders @cityofcasselberry
We’re open till 6! I’ll be making buttons, listening to #trex #marcbolan Come say hi 👋
Alright fine, we’ll put out the Andy Warhol duffel bag. Shop has been restocked.
We’re open 4-10pm tonight. It’s Saturday!
Does anyone have anything tacky, ugly, weird or wonderful to donate to our “flower” beds? We have two birds.